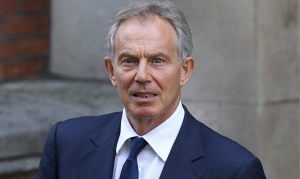 For many years I was a Labour supporter. It wont make me many friends in the blogosphere, but I liked Tony Blair and the “New Labour Project”. I admires Margret Thatcher when she first came to power and I saw the fresh faced, media savvy, televisual Tony Blair as a reformer and the best chance Labour had had for many years, to get into power and so it came to pass (young Jeremy Corby supporters take note)

I mention Margaret Thatcher as their similarities in terms of the sweep of political discourse over the years is striking. Some could argue that “shock and Awe” was Tony Blair’s Falklands, but not so well executed and without the Para’s, I digress.

I heard on today’s news (when I wasn’t making up backstory’s for the newsroom figures on the BBC loop [see my previous post])  that the redoubtable Mr Blaire is to make a speech today the jist of which is that Remainer’s should take any of their friends who voted to leave the EU to one side and persuade them that they were wrong to have voted to leave as they were misled due to incomplete or dubious information put forward by the Brexiteer’s.

Seriously, you couldn’t make it up! this is the guy who sent us to war based on the famous sexed up dossier and in so doing killed and maimed hundreds of young men and women needlessly. Again I digress from my main point, which I am coming to. The stupidity of his proposition and its source beggars belief but hopefully the newspapers and other media will be in overdrive tomorrow pointing  this out

No, my point is related to an affliction that affects “popular” politician’s (not to be confused with populist politician’s) Mrs Thatcher came to power at a time when the unions were systematically destroying the country and the old guard, the people running major manufacturing businesses were complicit in this as they didn’t or wouldn’t understand the sea change driven by increasing workers rights. complete the triangle with a public sector so bloated and poorly run and it was little wonder that we were rightly called the sick man of Europe (thankfully a mantle now taken on by the French, again I digress). She bought in union reform, sold off British Gas, BT, water companies etc., allowed the sale of council houses at terrific discount’s, developed the financial services sector and created yuppie’s. Fantastic. Then she developed the PM affliction to which I refer. So certain was she of her abilities she started to believe her own PR. If you consider a pendulum, it started on the left (metaphorically and politically) and with all the good things she did she bought it to equilibrium, the mid state, a good place. But no, the need to keep proving herself became and how right she was drove her on.  she introduced the hated Poll Tax and I sat and watched with tears in my eye’s as British mounted police, baton charged the striking miners at Orgreave. The pendulum went to far the other way. How could someone with such a steady hand make such terrible and ultimately catastrophic mistakes? Simple, she forgot the parable of the “emperor’s new clothes” (probably not a good metaphor as it involves her ending up naked and Geoffrey Howe as the little boy who spill the beans) any way, you get the picture.

Enter our Tony, May 1997, landslide victory. Labour in power after years in the wilderness. He introduced much needed reforms and created a political blue print with Alastair Campbell that was the envy of his adversary’s and the scourge of the media. The fight against Child Poverty was enshrined into law, free nursery places and of course the “Good Friday Agreement”  other references can be found at via this link:-

All good stuff, then he gets afflicted, pendulum coming in from the right (for the sake of impartiality) gets to equilibrium. Stop. But no, he too starts to believe his won PR. The “Dodgy Dossier” The cavalier attitude towards parliament and the British people through his un proven but suspected agreement with George Bush to drag us kicking and screaming into a war for the sake of vanity. Boom!, out he goes and in come Gorgon Brown, oh dear the pendulum has done for him again.

So our Tony goes on the American lecture circuit, builds up his property portfolio, becomes a Middle East go-between, but clearly something rankles with him, there is some unfinished business. Then along comes Brexit.

His brand was considered toxic in the campagn so he was kept off the front line. but now he feels the need to be involved. is it for the sake of the British people? I don’t think so, for the fame?, no he has been there and done that, the money? Once again that sure footedness, deftness of touch that swept him to victory and vanquished his union detractors has left him and I believe when its gone its gone. If its an itch that needs to be scratched, pick some other avenue. this is a fight he doesn’t need to get into, could it be that he knows best?…….history suggests not. that leaves Vanity, some people never learn.

As I am new to this game, I need to emphasise the above is simply my view