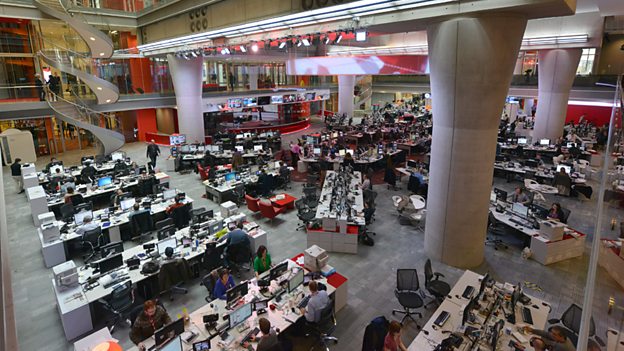 I, like many people watch the BBC news most mornings. It is perhaps a measure of the need to fill the 24hour news cycle that often the people interviewed or their content are less than riveting. Its at these points my focus starts to wander and instead of watching the interviewer, I start watching the background upon which the interviewee is superimposed, the busy news room filled with people rushing hither and thither, clearly on important business to get the days news out. Next time you watch, pay attention to the frantic activity in the background and you will see that it is a loop.

I am sure you clever people in blog land knew this, but it came as a surprise to me when I first noticed.

My wife and I now fill boring bits of the news in by naming many of the repeating figures and providing them with a back story “lady retuning from a heavy night out” “man with back pack very confused” “guys more friendly than they should be, realise they are being filmed and split up” “Lady dressed up to the nines who thinks she is on the catwalk” you get the picture, or more accurately the loop. Try it see what stories you can find, in many cases it beats the news.

I then got to thinking, if it is a loop, did the BBC management say one day, OK guys we are going to film you doing you job, but its only for background purposes? as a caring employer, can they do that?

The alternative is that the busy background scene is staged and so are the people employees or actors, if the former, presumably they had to apply, how were they vetted? did they get paid? were diversity, gender and age criteria adhered to? if the latter,  is this a sensible use of BBC resources? does this fall into the category of fake news? (certainly fake newsroom!!)

You would think I had better things to occupy my time, you would be right but I just thought I would put it our there.